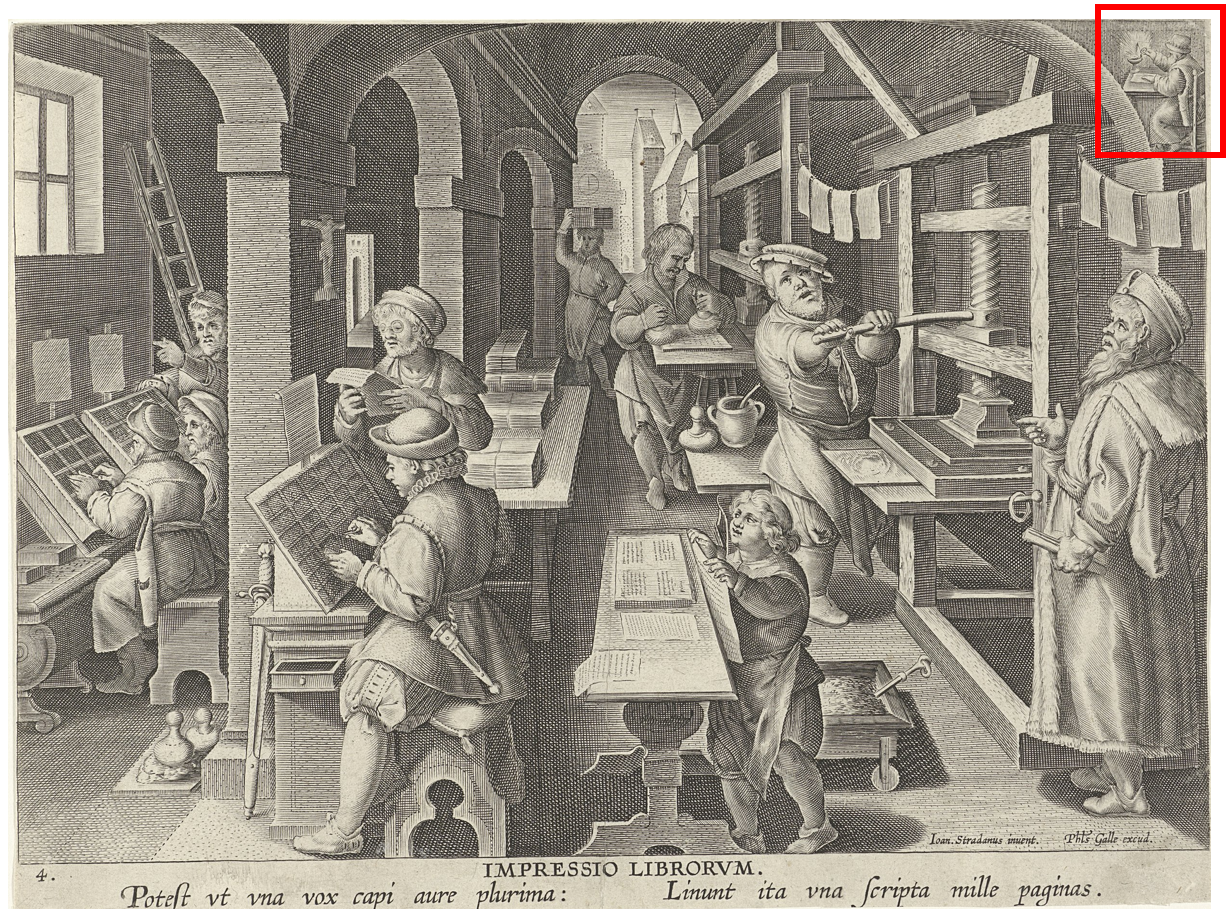 This image of a printer’s workshop illustrates the role of the scientist in the process of knowledge dissemination - from the point of view of a 16th century publisher.

Tucked away in the top right corner, the poor scholar is working late, ‘burning the midnight oil’. When the scholar has finished his manuscript, a whole group of artisans sets out to work, to transform it into a book. The work is financed by the publisher (on the right) who will also take care of its distribution and marketing once the book is printed.

The engraving is well over 400 years old, but still gives the modern researcher something to think about. First of all, it shows the aspects of scholarly publishing that follow the actual writing, i.e. the reviewing, the editing, the multiplication, and the distribution of a text. Without these later stages, the text would be nothing more than a set of ‘notes to self’, a personal diary. It also reminds us of how expensive it used to be to reproduce a text.

Obviously, things have changed quite a bit:

In the past 25 years these three developments are at the root of what is known as the Open Access movement.

Open Access initiatives come in many shapes and colours but the core idea is simple: they all aim to make the results of scientific research freely available to everyone, especially of the research that has been financed with tax-payer’s money.

For you as researcher there are two sides to the Open Access coin:

In the first case you are a consumer of information, in the second case you are a producer. It won’t surprise you that as a producer you are in a much better position to influence the availability of scientific publications, starting with your own...

There are various ways to offer your own publications in Open Access to the largest possible audience, i.e. to everyone with an internet connection. Even though there are a few different scenarios, the core options are simple:

In the second case you deposit the accepted version of your paper, also known as the author accepted manuscript, to the institutional repository, Pure.

How do you know which journals have Open Access options? The Erasmus Journal Browser presents the most important journals and their OA opportunities, including OA deals the VNSU (the Association of Universities in the Netherlands) has made with major publishers. In these deals the cost of publishing in Open Access (APC) are collectively bought off by the universities, in exchange for an increase in subscription prices. Via the Journal Browser tool you can check if you eligible to an APC discount when publishing in these journals.

But please keep in mind that this OA landscape changes constantly!

For a variety of reasons. The most obvious one of all we have just mentioned: you write to be read; and the more people who can read what you wrote, the better. This holds for you as an individual researcher, but it also holds for the Erasmus university as a collective body of academic researchers.

Also, by publishing in Open Access the cost of knowledge dissemination will eventually come down or stabilize at the very least. Thirdly: before your text can be read it needs to be found.

If you need information about the details, don’t hesitate to contact the Open Access officer
The library also offers assistance if you have questions about copyright issues at copyright@eur.nl, even if you are not entirely sure your problem is related to copyright.